Angelino is just one of the thousands of deadbeats living in Dark Meat City, a ruthless megalopolis in sunny California. At day, he runs the streets of the city delivering pizzas. At night, he squats a seedy hotel room with his homie Vinz and an army of cockroaches. Following a scooter accident caused by the heavenly vision of Luna, Angelino starts experiencing violent headaches doubled with strange hallucinations. Chased by men in black, Angelino soon realizes he is their target. Following a terrifying manhunt, he is finally captured and learns the truth about his origins: he is half human and half Macho, a creature from the dark matter of the universe. 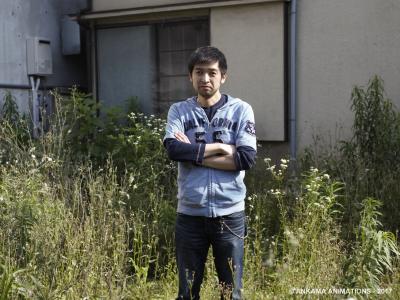 Shojiro Nishimi is a director of animated films known for his realistic productions and spectacular action scenes. His use of original characters with distinctive proportions immediately attracts his viewers’ attention, and his unique, delicate universe is the culmination of his artistic brilliance. He worked as director of animation on Tekkonkinkreet, which was rewarded Best Animated Film at the Japanese Academy Awards. 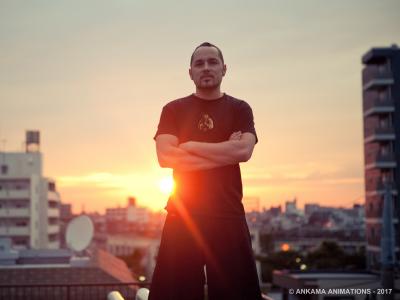 Run’s work mixes traditional illustration, pulp references and urban culture. He created in 2002 the Operation Blackhead short animated film, precursory of the Mutafukaz Graphic Novels. This short film goes around the world in Festivals, and was nominated at the Salt Lake City Sundance Festival in 2003. Run joined Ankama as a Collection Director in 2006. The first volume of Mutafukaz was published the same year. In 2008, he launches the Label 619, proposing Graphic Novels, Comicbooks and Artbooks that all share a common style, including gritty universes, urban-inspired designs, and vintage pop-culture references.