Search is a short documentary film that presents the searching phase that the film’s director went through after her interrogation and arrest by the Israeli occupation forces in Jerusalem. It made her see everything differently; her connection with her home and the streets changed; she felt like everything around her was pushing her to leave her own city, Jerusalem. Once she left the city, there was something that still drew her to it. Such a contradictory relationship with the place rendered her in a constant state of searching. She made this film as a means to research her surroundings. 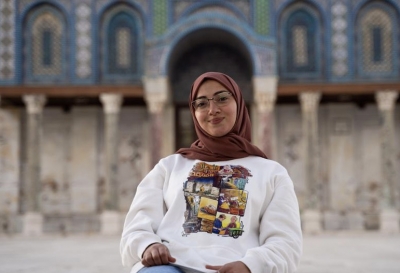 Alaa Al Dayeh, born in 1997 in Jerusalem, holds a BA in film production and cinematography from Dar Al Kalima university. She has a number of films, some of them are experimental, like Exit, which won Best Experimental Film in Bethlehem Student Film Festival. She has made one work of video art, “Retrieving Time”, one feature film, Majdouline, and a documentary in post-production, Nisrine. She is passionate about working in an experimental style. She is currently working as a photographer as well as an assistant director. She shoots her own documentary movies. She has worked as an assistant director in multiple movies, most recent of which are A Home in Jerusalem, by Palestinian director Muayad Alayan and Six Days are not Enough.