Synopsis
Twelve Palestinian women talk of their life before the Diaspora; of their memories, of their lives and of their identity. Their narratives are connected by the enduring thread of the ancient art of embroidery. Twelve resilient, determined and articulate women from disparate walks of life stitch together the story of their homeland, of their dispossession, and of their unwavering determination that justice will prevail. 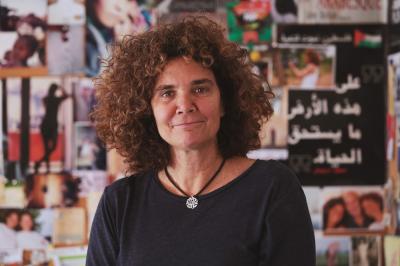 Biography
Carol Mansour (born in Beirut, Lebanon, 1961) is a Palestinian/Lebanese independent documentary filmmaker who has achieved international recognition and honor for her films, with over 50 film festival screenings and official selections worldwide. Her films have won numerous prestigious awards including Best Documentary Award at the Al-Ard Film Festival in Sardinia most recently. Carol’s work reflects her concern for human rights and social justice, covering issues such as migrant workers, refugees, mental health, rights of people with disabilities, war and memory, right to health, environmental issues, and child labor.