Synopsis
Holding his personal camera and one of the lowest ranking passports in the world, a Palestinian filmmaker attempts to defy the imposed movement restrictions and explore the planet as a backpacker. Over the period of three years, Sameer travels from Palestine to Europe to the Canary Islands and Ecuador. He documents his encounters with other freedom seekers, wanderers, refugees, immigrants, indigenous communities and nomads; all of whom are one way or another facing the physical and non-physical borders, barriers and walls that are erected between people in our modern time. 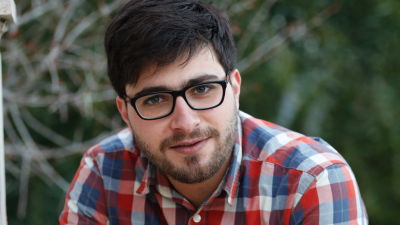 Sameer Qumsiyeh is a Palestinian filmmaker based in Beit Sahour. He is a graduate of the Documentary Film Production Program of Dar al-Kalima University College of Arts and Culture. He has extensive experience in editing and has worked on several award-winning films including LOVE, THEFT AND OTHER ENTANGLEMENTS (2015) and THE REPORTS ON SARAH AND SALEEM (2018). Sameer has also worked as videographer, sound recorder, and DIT on several productions including National Geographic, ZDF, and MBC Group. He is a partner in PalCine Productions, a Bethlehem-based company focusing on narrative feature, documentary and short film production. His documentary short, CONNECTED, was screened and awarded at several film festivals.